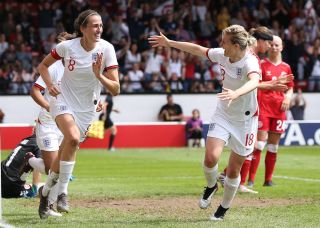 Jill Scott felt England Women looked tired in Saturday’s win over Denmark but has stressed the bigger picture is trying to ensure they are in top shape come their World Cup opener against Scotland in two weeks.

The Lionesses struggled to find much rhythm as they beat the Danes 2-0 at Walsall’s Banks’s Stadium in their penultimate World Cup warm-up game, with Nikita Parris and captain-for-the day Scott getting the goals.

Regarding the performance, boss Phil Neville said afterwards he had “expected a little bit of fatigue” given the training his players had done in the build-up and their team-bonding exercise with the Royal Marines that involved a night’s camping.

Walsall, you were wonderful. Our #RoadToFrance is almost over….😎 pic.twitter.com/NQ8XVp07DL— Lionesses (@Lionesses) May 25, 2019

When asked about that and if the players had been tired, Scott said: “I think it’s just all part of a process really.

“We’ve been doing a lot of weights and a lot of hard training, whereas if you were in a tournament you wouldn’t do that.

“It’s obviously with the bigger picture being to hit the ground running when we start that game against Scotland.

“So I do think the girls probably looked a little bit tired but we ground out the result and I think that’s the main thing.”

Neville, who also spoke of the pitch being “energy-sapping”, labelled his side’s performance in the first half “messy”.

That half saw Denmark produce a number of attempts on goal early on and then have Signe Bruun’s effort ruled out for handball shortly before Parris struck in stoppage time.

After the break, Scott scored a 59th-minute header between Danish captain Pernille Harder being denied by Karen Bardsley and curling a free-kick just wide.

Midfielder Scott said: “We could have been better, we could have moved the ball a little bit better. (We’re) not using it as an excuse, but the pitch didn’t help us at times.

“But overall, getting that result and carrying some momentum into the World Cup is the most important thing.”

England’s preparations for the tournament in France continue with a final warm-up game against New Zealand at Brighton’s Amex Stadium next Saturday.

The Group D clash against Scotland is in Nice eight days later.