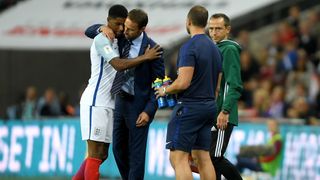 England are in a much stronger position under Gareth Southgate than they were with Roy Hodgson, according to striker Marcus Rashford.

The Manchester United star earned a place in Hodgson's plans at Euro 2016 after becoming his country's youngest debutant goalscorer in a warm-up match against Australia in May of that year.

The finals ended in dismal fashion, with England dumped out at the last-16 stage by Iceland, after which Hodgson left his role.

England's World Cup qualifying campaign has progressed well since Southgate took over following Sam Allardyce's short spell in charge and a win against Slovenia at Wembley on Thursday will be enough to guarantee their place at the finals in Russia next year.

Rashford has few good memories of his first senior international tournament, but feels there are reasons to be positive about the changes Southgate has made.

Big week ahead. One win secures our ticket to Russia October 1, 2017

"I'll be honest with you, it is difficult to see it as a positive," the 19-year-old said of the experience in France. "We went out before we’d expected to go out, and before we wanted to go out, so it was a disappointing end to the season for me.

"I think the set-up and the aim and vision of where we want to go is much better now than what it was.

"Not necessarily on the pitch but off the pitch – around the hotel, everyone feels comfortable and relaxed to be themselves.

"That's something that I would say is different to last time. Everyone is being themselves and we're starting to understand each other more.

"At internationals, you don't get much time together to understand each other's personalities and what they like to do outside.

"The more we understand each other, the better the results will be on the pitch. That was from the manager himself; that was one of the things he wanted to install. As players we've bought into it, and hopefully we can get the results."

England were held to a 0-0 draw in Slovenia last October.