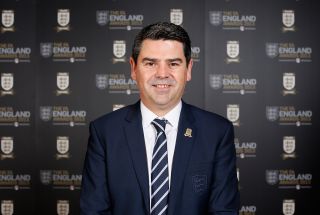 Eight years ago the sight of wives and girlfriends (colloquially known as WAGs) wandering around Baden-Baden attracted a frenzy of media attention during England's 2006 FIFA World Cup campaign in Germany.

The presence of the players' partners was deemed to be a distraction and England managers in tournaments since then have been eager to avoid a repeat.

Roy Hodgson's squad will be based in Rio de Janeiro for this year's showpiece and Bevington has stressed that WAGs will not be present at the team hotel.

"We will not be organising any official trips to the World Cup for the families." he told Sky Sports.

"We had a situation in Poland (at the 2012 UEFA European Championship) where lots of families did come out, and that is entirely at the discretion of the individual players.

"There may be some time when we are in Miami (where England will prepare for the tournament) for families to come out and spend some time with the players but again it will not be arranged by us.

"They will not be with us in the hotel in Rio."

England begin their World Cup campaign with a Group D clash against Italy in Manaus on June 14, before facing Uruguay and Costa Rica.