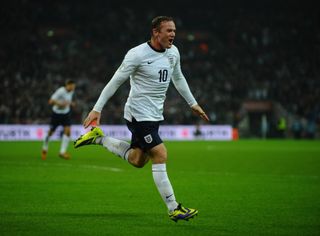 Not much is expected of England in Brazil, especially after Roy Hodgson named the second-youngest squad in the nation's history on Monday.

But speaking to the Mirror, Rooney backed his team-mates to advance ahead of Italy, Uruguay and Costa Rica in Group D and add to their maiden World Cup triumph, which was back in 1966.

"We can all be heroes," Rooney said. "It's our chance to make history for our country and you don't get many opportunities.

"You see all the programmes on TV, looking back at the history of the World Cup and that's what we want to do.

"We want to create our own bit of history so in years to come, people will look back at what we did. It's there, the stage is set. We just have to go out and deliver.

"It would be great if in years from now, people say 'remember England in 2014' because that means we will have done really well or won it."

Key to England's hopes at the showpiece event is Rooney, who has scored 38 goals in 89 appearances since making his debut against Australia in 2003.

However, question marks still linger as to whether Rooney can perform at the World Cup, having failed to find the back of the net in Germany (2006) and South Africa (2010).

The 28-year-old has been under an injury cloud in those two previous tournaments, however, which is no different this time around after a groin injury sidelined him for Manchester United's final two Premier League games of the season.

But he has reassured fans that he is fit and ready to go for England's opening game against Italy in Manaus on June 14.

"You always feel this can be your tournament," he said.

"It hasn't happened for me at the last two World Cups but I've prepared as well as I can for this tournament. I'll be ready and fully fit and I'm really excited about that.

"It's about the team and as a team we have to do well and I'm hoping I can be part of that. I know if I have the tournament I know I can have, then we'll do really well."