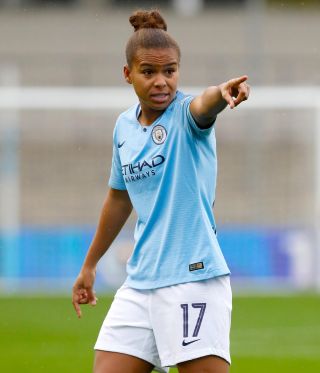 Nikita Parris is joining Lyon with her sights firmly set on adding the Champions League title to her CV and taking her game to another level.

The England forward’s move to the French outfit was confirmed on Tuesday morning, 10 days after she had announced on social media that she was leaving Manchester City.

Lyon won the Women’s Champions League for a fourth successive year, and sixth time in total, on Saturday as they beat Barcelona 4-1 in Budapest.

“I want to continue to win trophies. At Manchester City I won all the domestic trophies and the one for me next is the Champions League.

“I think it’s clear to see that Lyon plan to continue to win the Champions League and be the best team in Europe.

“So it made sense for me to move there, to really improve my game, each and every day with some of the best players in the world in training, and put myself in contention to win plenty of trophies still.”

After five years the moment has come, to call time on my career as a Manchester City Women’s player…— Nikita Parris (@lilkeets) May 11, 2019

Parris joined City in January 2015, initially on loan from Everton before signing permanently a year later, and helped the club win the Women’s Super League title in 2016, the Women’s FA Cup twice and the Continental League Cup twice.

In 2018-19 City claimed both cups, finished second in the WSL and were knocked out in the Champions League last 32 by Atletico Madrid – having been eliminated by Lyon in the semis in 2018 and 2017.

Parris became the WSL’s all-time top-scorer in November, she ended up with a tally of 19 WSL goals for the season, and she was named the FWA Women’s Footballer of the Year.

The 25-year-old, scorer of 11 goals in 32 England appearances, added: “I think it will ultimately push me forward and fire me into a next category of being one of the best if not the best player in Europe, and that is my aspiration.

“When I came into football my whole identity was to be one of the best players in the world, if not the best player, and for me, that is what is driving me each and every day.

“That will be a challenge, there are a lot of great players out there, but for me it is about putting my best foot forward and really kicking on.

“We didn’t win the Champions League, but I’ve been to the semi-finals with Manchester City and sadly we didn’t get past Lyon. So it was about going to a club that could really kick me on and challenge me even more.

“And I really wanted to put myself out of my comfort zone, and that meant leaving England, and really changing culture and different ideas and philosophies in a club environment.”

Parris follows international team-mates Lucy Bronze and Izzy Christiansen, in 2017 and 2018 respectively, in going from City to Lyon.

Parris and Bronze are in Phil Neville’s England squad for this summer’s World Cup in France, which starts on June 7.

In March, the Lionesses won the invitational SheBelieves Cup for the first time, having beaten Brazil and Japan either side of drawing 2-2 with hosts the United States, the reigning world champions.

Parris said: “As you’ve seen with our performances at SheBelieves, we can go up against any team in the world.

“It’s about making sure the preparation going into the World Cup is right, and everyone is raring to go.”

England have friendlies against Denmark in Walsall this Saturday and New Zealand in Brighton a week later before opening their World Cup campaign by facing Scotland in Nice on June 9.

:: Nikita Parris is a Lucozade Sport ambassador and she and England captain Steph Houghton are the first footballers to be featured on a Lucozade Sport bottle. The special edition bottles are now available nationwide.