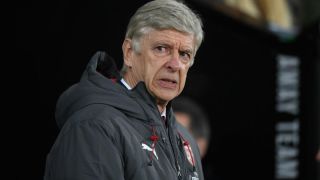 Arsene Wenger has sympathy for referees trying to spot simulation, as the Arsenal manager feels English players have become "masters" of diving.

Simulation has been a hot topic after Tottenham's Dele Alli appeared to dive in the penalty area in a dramatic 2-2 draw with Liverpool on Sunday.

He was duly handed a third yellow card for simulation in his Premier League career, taking him level with Wilfried Zaha.

Alli and Bournemouth's Adam Smith are the only two England-born players who rank in the top six for most bookings for diving, although Raheem Sterling and Zaha - products of English academies after being born in Jamaica and Ivory Coast respectively - are also among the frequent culprits.

Spurs boss Mauricio Pochettino appeared to defend Alli's actions after the match, claiming that football is all about trying to "trick your opponent", though Wenger does not necessarily think his counterpart was outing himself as a diving apologist, as some have suggested.

3 – Dele Alli has been handed three yellow cards for simulation since his debut Premier League season in 2015-16; no player has received more. Hoodwinked.February 4, 2018

"I am convinced he wanted to say that tricking your opponent is to be clever," Wenger told reporters at his pre-match news conference. "Was it an apology for diving? I'm not sure.

"I don't think he would. In my case, no. We want to get diving out of the game. I remember there were tremendous cases here when foreign players did it, but I must say the English players have learnt very quickly and are maybe the masters now.

"I don't tell my players to dive. I don't encourage them to dive at all, but if you look at the situation, sometimes you want your players to be intelligent, they have played a little bit with the rules, they make more of it on the penalty case.

"Every striker will do that. They extend a little bit the rules. Where is it and how far can you go? That is down to the referees and I think that sometimes, at normal speed, it is very difficult to determine, I must say. I can be harsh with referees, but on that front, most of the time it's difficult."