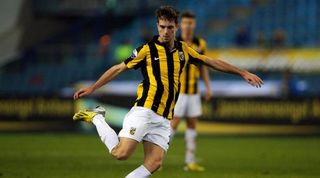 Peter Bosz's Vitesse side led the Eredivisie from mid-November until their 1-1 draw away to NEC Nijmegen last week saw Ajax move top of the Dutch top tier with their 1-0 triumph on the road at Go Ahead Eagles.

Vitesse (41 points) are in danger of dropping further behind Ajax (43) when they travel to Rotterdam to play Feyenoord (36), who sit fourth in the league.

The Arnhem-based club have not won at Feyenoord since 2005 and while Friday's hosts lost 3-2 away to struggling ADO Den Haag last week, they have won all but three home matches this season, including their past three.

The past three matches have seen Vitesse stutter with Bosz's side giving up a lead each time to draw twice and win once.

Vitesse's young midfield trio of Davy Propper, Marko Vejinovic and Christian Atsu will be crucial to their side's hopes having stepped up in the absence of Theo Janssen, who is out for the rest of the season after tearing the anterior cruciate ligament in his left knee in October.

For Feyenoord, Italian striker Graziano Pelle will be the key man, having scored 15 goals in 18 games in the Eredivisie this season.

If Vitesse lose and Ajax win in Utrecht on Sunday, the reigning champions will move five points clear at the top of the table.

But Ajax also face a tough trip having only won once in their past five visits to Utrecht.

Ajax cruised past Jan Wouters' men 3-0 earlier in the season and should be confident up against a side that have lost their past four games, although Utrecht are sure to be up for the contest against the Amsterdam giants.

Twente could overhaul Vitesse if they lose to Feyenoord with the Enschede-based club four points behind Bosz's men with a game in hand.

If Twente beat Groningen on Wednesday in their left over match and defeat Cambuur on Sunday, they will move to 43 points, which would see them level with Ajax if Frank de Boer's team slip up against Utrecht.

At the other end of the table, bottom club NEC could maintain their mini-revival since the winter break when they host 12th-placed Go Ahead Eagles.

NEC have 19 points and are undefeated in 2014 and could rise two positions if they win, and RKC Waalwijk and Den Haag lose to PSV Eindhoven and Heerenveen respectively.

In other matches, PEC Zwolle will entertain Roda JC, Heracles will host NAC Breda and Groningen will visit AZ Alkmaar.