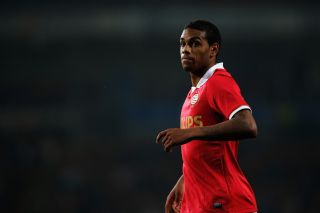 Phillip Cocu's PSV bounced back from defeat to AZ Alkmaar in their last Eredivisie match with a last-gasp 2-1 win over struggling RKC Waalwijk, a result that moves them level on points with Twente.

PSV were made to work hard for their triumph, with Jurgen Locadia firing home their winner in the 88th minute just moments after Sander Duits had been dismissed for a second bookable offence.

Ola Toivonen had put PSV ahead only for Robert Braber to pull Waalwijk level on the stroke of half-time.

Ajax sit one point behind the top two after a comfortable 3-0 home triumph over FC Utrecht.

Thulani Serero opened the scoring shortly before the break and Davy Klaassen doubled Ajax's lead in the 59th minute.

Danny Hoesen then sealed the result with a third goal in the dying stages.

Early strikes from Stefan de Vrij and Graziano Pelle proved enough for Feyenoord as they moved up to fourth with a 2-1 win at Vitesse.

De Vrij and Pelle found the net in the space of three first-half minutes to give their side a handy cushion.

Vitesse set up a tense finish through Mike Havenaar's 83rd-minute strike but were unable to find an equaliser.

In the day's other fixture, Groningen beat AZ Alkmaar 2-1 to move above their opponents and into eighth.

Yet Groningen were not to be denied and claimed three points courtesy of a third goal this season from 17-year-old forward Richairo Zivkovic.