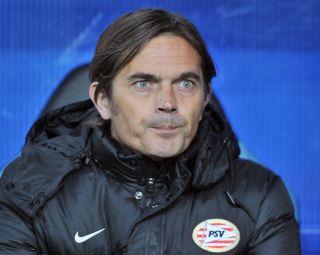 FC Twente's 1-1 draw at home to Ajax on Saturday moved them to the top of the table, but their stalemate meant PSV could have gone two points clear with a win at Euroborg.

roningen, however, sprung a surprise as Tjaronn Chery played an excellent througball in behind right-back Joshua Brenet five minutes after half-time and Filip Kostic collected the pass before firing into the net through Przemyslaw Tyton's legs.

It was the 20-year-old's first league goal of the season and it was enough to claim the three points for the hosts, despite PSV creating numerous good chances.

The win of the weekend was undoubtedly PEC Zwolle's 6-1 hammering of ADO Den Haag, with the win seeing them move up to third, level on points with PSV.

Mustafa Saymak opened the scoring 22 minutes in and the 20-year-old doubled his tally towards the end of the half, while Fred Benson ensured they took a 3-0 lead into half-time.

Mateusz Klich grabbed his fourth assist of the day as Benson made it 4-0 nine minutes into the second half and although Mathias Gehrt pulled one back just after the hour mark, the scoreline soon became more one-sided.

Bram van Polen and Giovanni Hiwat completed the rout in the final 10 minutes to cap off a resounding victory.

AZ Alkmaar moved up to eighth with a 3-1 win over strugglers Cambuur, but they had to do it the hard way as they conceded an early lead, with Michiel Hemmen breaking the deadlock six minutes in.

Roy Beerens and Aron Johannsson made sure AZ took a lead into the break, and the American scored his seventh of the season 18 minutes into the second period to clinch the victory.

Ten-man NEC held Heracles to a 1-1 draw away from home, but visitors were left disappointed as they let their lead slip late on.

Rens van Eijden struck in the second minute and although Christoph Hemlein received his second yellow card only half an hour later, they held on until three minutes from the end when Jens Streutker hit the equaliser.