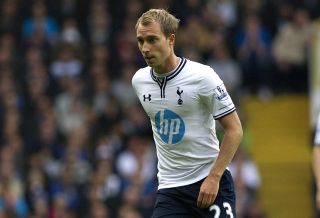 Eriksen, who joined Tottenham from Ajax in August for £11million, has made a bright start to life in the Premier League, starring in Spurs' 2-0 win over Norwich City last week.

He came off the bench to score an outstanding goal in the club's 3-0 UEFA Europa League win over Tromso on Thursday and the 21-year-old looks set to make a big impact at White Hart Lane this season.

The Denmark international admitted that he was not ready to switch to England last season and believes that he made the right decision to spurn the advances of City.

"It took me a while to get to England because I said no a few times," he said.

"Last summer, City really wanted to sign me, but it didn't feel right. Maybe I wouldn't have played there. I wouldn't go to a club just to stay on the subs' bench.

"I didn't feel ready for a league like the Premier League, and now it looks like I moved at the right time.

"A lot of players moved from Ajax in the last year and it gave me responsibility and made me grow. It made me better. It was exciting there, but you have to wait for the right club to come along.

"I've read about the history of Tottenham and I have watched games over the years, so I know about the club and how they like creativity.

"I score more goals like the one against Tromso in training and, hopefully, there will be more to come in the games."

Eriksen is set to start in Tottenham's Premier League trip to Cardiff City on Sunday.