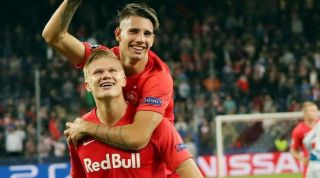 Norwegian striker Haaland became the third-youngest player to score a Champions League hat-trick in a 6-2 win over Genk on Tuesday, behind Raul and Wayne Rooney.

Football.london reports that he caught the attention of Gunners scouts when he found the net during a 5-1 win away to Tyrol recently.

The Premier League side are said to have registered interest in Szoboszlai over the summer, who was also on target against Genk.

The outlet believes that Arsenal’s initial approach was made with a view to a permanent move taking place at the end of the 2019/20 campaign, allowing the midfielder to accumulate experience with Salzburg before taking the step up to a top European league.

However, the likes of Juventus and Inter Milan could challenge the Gunners for the 18-year-old’s signature.