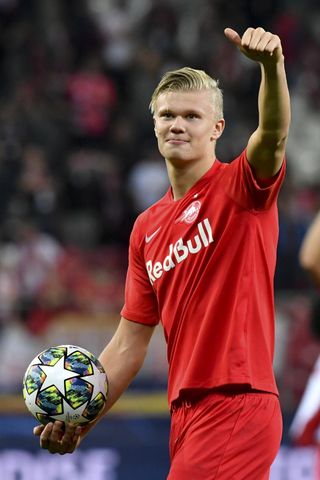 It was the Norwegian’s third hat-trick in eight games for Austrian side Salzburg this season, during which he has scored 14 goals.

Haaland first caught the wider footballing world’s attention when he scored nine goals for Norway in May when they thrashed Honduras 12-0 at the Under-20 World Cup in Poland.

“He’s a boy with great energy, always with a smile on his lips and everyone likes him. For a 19-year-old, that’s incredible. He always thinks about what the next step is.”

Good morning! Our boys put in a 90 minutes of near perfection to destroy KRC Genk 6-2 on a Champions League night we are not going to forget for a very long time. Enjoy the highlights on https://t.co/oMGD1ET5yr. #FCSGNKpic.twitter.com/53M1OB5tMY— FC Red Bull Salzburg EN (@FCRBS_en) September 18, 2019

Haaland is the third-youngest player to score a Champions League hat-trick. Raul and Wayne Rooney both achieved the feat when they were 18, for Real Madrid in 1995 and Manchester United in 2004 respectively.

Haaland, no longer eligible for England, grew up supporting Leeds, where his father spent three years as a player until 2000.

In an interview with Norwegian newspaper Aftenposten in 2017, Haaland said: “The dream is to win the Premier League with Leeds.

“In addition, the goal is to become a better player than my dad was. I hope to get more caps than he did.”