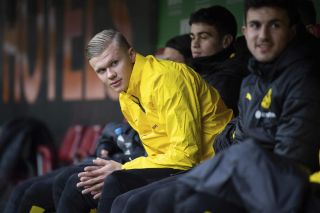 Erling Haaland enjoyed a debut to remember as he scored a 20-minute hat-trick after coming off the bench in a 5-3 win for Borussia Dortmund at Augsburg.

The 19-year-old – son of former Manchester City player Alf-Inge – had been linked with Manchester United before opting last month to swap Red Bull Salzburg for Dortmund.

Haaland was named among the substitutes for Saturday’s trip but was thrown into the action after 56 minutes with his side trailing 3-1.

The Norwegian took just three minutes to open his account, slotting home after being played through on goal by Jadon Sancho.

And Haaland’s treble was complete 11 minutes from time, when he tucked home a left-footed strike after receiving the ball from Marco Reus.

Haaland became the seventh player in Bundesliga history to score a hat-trick on his debut and the first since Pierre-Emerick Aubameyang, who also did so for Dortmund and wearing the same number 17 shirt.

Two goals from Florian Niederlechner and one from Marco Richter had seen Augsburg into their 3-1 lead, with Julian Brandt scoring Dortmund’s other goal.