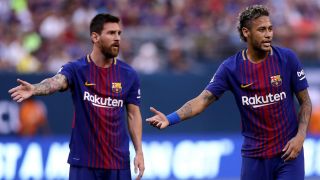 Neymar would have to change sport if he is serious about stepping out from Lionel Messi's shadow, according to Thierry Henry.

The Brazilian stunned the footballing world in August by completing a record €222million switch from Barcelona to Paris Saint-Germain, amid speculation he sought individual acclaim away from the Camp Nou's regular headline act.

And Neymar has made a fine start to life at PSG, scoring 28 goals in 29 appearances across all competitions with Unai Emery's men seemingly set for a return to domestic dominance after seeing Monaco storm their way to Ligue 1 glory last season.

Neymar was a Champions League winner alongside Messi and Luis Suarez with Barca in 2015, but hopes of European success this time around hang in the balance after PSG's 3-1 defeat at Real Madrid in the opening leg of their last-16 tie.

And Messi's former team-mate Henry believes Neymar would have to take drastic action to achieve his goal of usurping the Argentine atop the superstar hierarchy.

"I don't know if Neymar left Barcelona to get out of Messi's shadow," the Frenchman told Marca.

"What is true is that all players are in Messi's shadow, and if Neymar doesn't want to be, he should change sport."