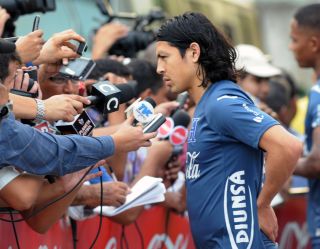 Honduras and Mexico are the last teams standing for an automatic spot in the 2014 World Cup in CONCACAF qualifying, with the final group games getting underway on Tuesday.

The Mexicans are also on the road, taking on already qualified Costa Rica, although they are also all-but guaranteed the fall-back scenario of an intercontinental play-off place.

A point would see Honduras guarantee their spot in the 32-team Cup finals next year but Wigan midfielder Espinoza said the gravity of the task intensified given their were on enemy soil.

"The match is crucial to our qualification hopes. But there's no doubt that it'll be tough, because Jamaica have nothing to lose," Espinoza said.

"We saw it with Costa Rica last Friday: they had already qualified but still caused us a lot of trouble. And this time we're away, which is never easy."

But Espinoza said the squad knows there is still work to be done for Honduras to earn a spot at consecutive World Cups for the first time in their history.

"The win over Costa Rica was important but the worst thing now would be to take our foot off the pedal, thinking that we've already qualified," the 26-year-old said.

"We must remind ourselves that we're not yet in Brazil, and that we won't be until the final whistle sounds and we have the necessary points to finish in the top three. We need to remain as focused as possible."

Mexico's Raul Jimenez acknowledged Honduras holds the fate of both nations in their hands but did not dismiss their chances of capitalising on any slip-up.

"I can't imagine a bigger game than this one against Costa Rica," the 22-year-old striker said.

"We have to go there, and we have to win.

"We can't control all of the factors in the other games but we must do what we can, and that is come away from San Jose with all three points."

The two qualifiers kick off at 130 GMT (Wednesday), along with Panama's hosting of the United States.

Mathematically, Panama can still earn a play-off spot, although they would need to beat the USA and hope Mexico lose - a tough ask for the Panamanians who have won just one of nine qualifiers.