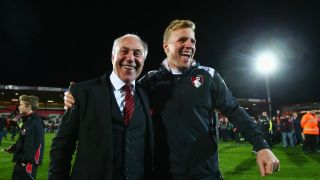 Describing himself as "an eternal pessimist", even Bournemouth manager Eddie Howe was effectively celebrating promotion after his side's 3-0 win over Bolton Wanderers on Monday.

The victory took second-placed Bournemouth to 87 points in the Championship standings, three ahead of third-placed Middlesbrough with a goal-difference advantage of +19.

Barring a ridiculous turn of events on Saturday, Bournemouth will join Watford in reaching England's top-tier of football - something the south coast club have never done before.

"I'm an eternal pessimist but it would take some blow-up from here not to make it. Obviously we've got a game to play, and we want to finish on a high," Howe told Sky Sports after the win at home against Bolton.

"It's very difficult to put into words. It's been an amazing journey and it's an incredible day for the supporters."

Bournemouth's future was under threat in February 2008 when the club was put into financial administration, before they were relegated to League Two for the 2008-09 season and were handed a 17-point penalty for failing to heed Football League insolvency rules.

"This club was heading out of business, and a lot of people have put in a lot of hard work to get to this position. Most of all the supporters, who've put their hands in their pockets time and again, they really deserve this success," Howe said.