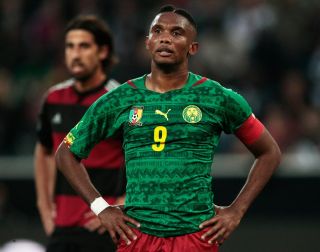 Eto'o was replaced as national skipper by Stephan Mbia on Tuesday, and almost immediately has withdrawn his services to coach Volker Finke.

Widely regarded as one of Africa's greatest-ever players, Eto'o posted on his official Twitter page: "I inform you that I am ending my international career.

"Thank you to all Africa, and to all my fans for your unconditional support."

Eto'o, who on Tuesday penned a two-year deal with Premier League side Everton, made his Cameroon debut as a 15-year-old against Costa Rica.

He was the youngest player at the 1998 World Cup after being called up by Claude Le Roy at the age of 17.

The 33-year-old has won almost everything there is to win at club level, and he also enjoyed success with his country, claiming gold at the 2000 Olympics as well as two Africa Cup of Nations titles in 2000 and 2002.

Eto'o played just once at this year's World Cup, in which Cameroon lost all three of their games and endured a campaign plagued by a bonus row and an alleged match-fixing scandal.