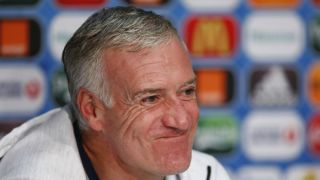 An astonishing 150,000 Belgians might have made there presence felt in Lille ahead of Friday's Euro 2016 quarter-final but it was the 11 Welshmen on the field who truly made the difference as goals from Ashley Williams, Hal Robson-Kanu and Sam Vokes secured a sensational 3-1 win.

Belgium's golden generation and their fans were left to reflect on a missed opportunity but there was not a shred of bitterness in evidence at the Gare de Lille Flandres when the victorious supporters arrived to catch their trains.

Devils and Dragons were as one, with the Belgium fans forming a guard honour for their Welsh counterparts, appreciating the joy and glory they so badly wanted for themselves. Wonderful scenes that were an example of football fans at their absolute best.

Amazing scene a in the Gare Lille Flanders where the Belgiun Fans did a guard of honour fir the Weldh fans July 2, 2016

DON'T TAKE ME HOME (YET)

However, we hope that tide of Belgian goodwill didn't sweep those Wales fans all the way back home. Get yourselves to Lyon for the semi-final against Portugal, folks - the good people at Euro Tunnel are offering a little sweetener.

In response to the inconvenience experienced by a number of Wales supporters on Friday, as trains to Lille from the UK were delayed and they were left in a race against time to make kick-off at the Stade Pierre Mauroy, Euro Tunnel will allow anyone wishing to stay in France for the semi-final to amend their tickets free of charge.

We can just see you all now - turning around with all the speed and grace of Robson-Kanu in a crowded penalty area.

FRANCE COACH AND CAPTAIN FOR THE CHOPPER

Anyone who has travelled on Paris' notoriously busy ring-road would have given a knowing nod to a decision taken by France coach Didier Deschamps on Saturday.

With the Stade de France not available for the traditional pre-game training session due to wear and tear, France held their workout at their Clairefontaine base on the outskirts of the French capital prior to Sunday's quarter-final against Iceland.

UEFA rules state, however, the press conference must be held at the venue, meaning Deschamps and captain Hugo Lloris were facing a lengthy trip through Paris' horrendous traffic.

But Deschamps took the local police up on an offer of a helicopter ride, meaning he and Lloris spoke at 11am and were back at Clairefontaine for lunch.

"The police put a helicopter at our disposal, which was very kind," said the France boss. "If they hadn't you [the media] would not have seen Hugo Lloris."

So Deschamps & Lloris dodged traffic jams on peripherique by taking... a helicopter to Stade de France. Clever. Why didn't I think of that?!July 2, 2016

While Deschamps and Lloris arrived in luxury, there was not such five-star treatment for the journalists who came bright and early to greet them in Saint-Denis.

Omnisport’s man at the stadium passed up hotel breakfast in the knowledge that UEFA’s well-stocked cafe would be good to go.

"Officially, yes. But we have no food."

"Ah, no problem. I'll have a cappuccino."

A real blow. Deschamps and Lloris ate like kings on that helicopter, no doubt.

Thankfully, the supplies for a hearty lunch had long arrived before Iceland undertook their press duties in the capital, but veteran coach Lars Lagerback had an appetite for something else entirely.

Asked to describe the emotions behind his calm exterior following the last-16 win over England, the 67-year-old former Sweden boss suggestively said: "I could compare it to something else but I don't now if I should do it here… and it was a long time ago.”

Lagerback on the feeling of win over "I could compare it to something else but shouldn't do it here." Racy July 2, 2016