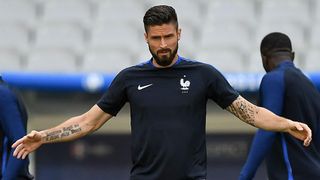 CALM DOWN OLIVIER, IT'S JUST A SEMI-FINAL

Olivier Giroud notched his second and third goals of Euro 2016 as France beat Iceland 5-2 to move into the semi-finals but we think someone should keep an eye on the Arsenal striker, who is starting to sound like a child on Christmas Eve ahead of Thursday's clash with Germany.

"It is more and more difficult to sleep before and after these matches," a surprisingly sprightly Giroud told a news conference on Monday morning. "We are more and more conscious of what we are doing. I want to stay awake to take in these experiences."

Hopefully, Giroud doesn't bring a literal feel to the criticism of forwards falling asleep when defending set-pieces in Marseille later this week.

He also spoke of his mouth being "a little less dry than at the beginning of the competition" when discussing nerves within the France squad.

Someone fetch that man a mug of cocoa!

It has been a wonderful few weeks for Wales fans watching Gareth Bale and Co reach the semi-finals of Euro 2016.

And it is set to get even better with drinks giant Budweiser - whose lager is produced in Belgium, Wales' victims in the last eight - announcing a free beer for each supporter.

A Budweiser UK spokesman said: "At Budweiser, we’re all about celebrating epic moments, and that’s why we wanted to raise a Bud to the dedication of all the Welsh football fans out there in honour of their recent success, and to show our support ahead of the nation’s next big game – by giving everyone 18+ in Wales a Budweiser on us."

There is a theme running here - Wales are doing quite well, just in case you hadn't noticed.

So well that the fanzone in the country's capital Cardiff has been switched for Wednesday's game to allow more people in.

It has been decided the previous site in Cooper's Field was not big enough to cope with demand for the game with Portugal and how now been switched to the Principality Stadium, with its 20,000 capacity.

FAW Chief Executive Jonathan Ford: "The scenes and support we have seen at home during the course of the tournament has been nothing short of memorable, and we hope that our passionate supporters can enjoy another historic night watching Wales."


THINGS STIRRING AT THE PALACE

In a tournament not exactly short on such things, it is an unusual quirk of Euro 2016 that Crystal Palace are the second-most represented club in the semi-finals behind Bayern Munich.

Wales trio Wayne Hennessey, Joe Ledley and Jonny Williams are primed for action against Portugal on Wednesday, while new recruit Steve Mandanda - who will push Hennessey for the Selhurst Park goalkeeping spot next season - joins Yohan Cabaye in the France squad.

A Mandanda assist for a Cabaye goal might not be a combination we ever see in England's top flight, but that's exactly what happened during France's late afternoon training session at Clairefontaine (hopefully one that took place following an afternoon nap for Giroud).

Benoit Costil had no chance as Cabaye screamed one past him - a sight to cheer many a south Londoner.

One for fans. Mandanda to Cabaye, who clatters one home July 4, 2016

The passion of Iceland's fans and their famous 'Huh' chant have featured in the diary on more than one occasion.

But following their crushing 5-2 defeat to hosts France on Sunday, it's now time for their supporters to put dreams of Euro 2016 glory to one side and return to their homeland.

Those travelling back on Monday, however, still had one last chant in them.

So, Iceland, thank you and farewell. HUH!