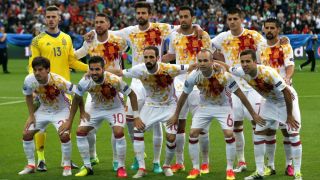 Gaizka Mendieta does not expect Spain to make wholesale changes, despite the departure of long-serving coach Vicente del Bosque, as the European giants enter a new era following their unsuccessful Euro 2016 campaign.

Spain's quest for a third consecutive European Championship title was ended by Italy in the round of 16 on Monday, with Del Bosque swiftly announcing his intention to step down after eight years at the helm.

Del Bosque guided Spain to 2010 World Cup and Euro 2012 glory, though he was unable to lead them out of the group stage in Brazil two years ago.

Former Sevilla and Athletic Bilbao coach Joaquin Caparros has been linked to the post, as the Spanish Football Federation and chief Angel Maria Villar plan for the future.

Regardless of who is appointed, Mendieta – who earned 40 caps for Spain between 1999 and 2002 – expects the new boss to carry on the work of predecessors Del Bosque and Luis Aragones.

"I don't think there will be massive changes. We have worked so hard and so long to get what we have got," the 42-year-old, a two-time Champions League runner-up, told Omnisport.

"It's a matter of small adjustments in the team and adapting to the philosophy of whoever is the new coach.

"It's not about changing the manager like you do with clubs, and you change the players or philosophy or ideas. The federation started working a long time ago on this idea of how we play, with this team and players.

"Therefore, whoever steps in, it won't make much difference in terms of the players. In Spain, we are lucky to have a very good players to pick from.

"More so, the manager will identify his personality to the team, but it will still be the same sort of philosophy, the football, the passing and attacking. So that's not going to change much.

"Whoever it is, it will be alongside the mentality that Spain has to keep progressing because football evolves. Like Germany did in 2006 and 2008. And like we did and we changed. You have to adapt to new times and I'm sure we will do it."

Since Giorgio Chiellini and Graziano Pelle downed Spain at the Stade de France, critics have dismissed the country's golden generation.

Of the 14 players that featured in the Euro 2008 final, four took to the field against Italy on Monday – Andres Iniesta, Sergio Ramos, David Silva and Cesc Fabregas, the Chelsea midfielder the only one of those younger than 30.

But there is a wealth of younger talent at the disposal of Del Bosque's successor and Mendieta – who was quick to underline the magnitude of Spain's exploits over the best part of a decade – is excited about the future.

"We have always had the players. Since my days and before and until now," he added.

"Luckily our academies work well. They play at a very young age with top teams in La Liga and some in Europe. It's a matter of putting those ingredients together and making something special.

"I think we obviously got spoilt with the way Spain play and won things. That was quite unique. We have to analyse and realise what happened was very special.

"Two Euros and one World Cup [in a row]. No team has ever done that before. So it tells you the magnitude of what we're talking about.

"Also we had a group of players who were very special like Xavi, Xabi Alonso, David Villa and Fernando Torres in that generation. It was a special time and obviously you want to replicate that.

"Now we have achieved that standard and level, we must try and stay there. You see Germany, Italy, Argentina, these teams always reach quarter-finals and semi-finals, they are always there, so I think Spain are where they should be.

"There are cycles. Argentina, Holland in the 1980s, Germany and more. We've had ours luckily. We have to be appreciative of that."