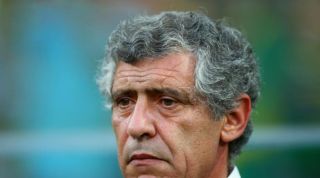 The former Greece head coach, given the Portugal top job in September, was handed an eight-game ban after abusing match officials at the recent FIFA World Cup.

He made his Portugal managerial debut on Saturday, with the friendly against France affording him an opportunity given his suspension only covers competitive fixtures.

And Santos may also be in the fray against Denmark, with the Court of Arbitration for Sport deciding on Monday whether to grant him an appeal hearing  - which would temporarily lift his reprimand.

"Independently, whether I'm on the bench or not, my contribution will be the same."

Santos can still pick his team and attend training - and he will be hoping for an improvement on the showing put forth versus France.

Indeed, Santos' reign began in disappointing fashion on Saturday as the hosts managed a 2-1 friendly win.

There are concerns on the injury front, too, with star man Cristiano Ronaldo pictured with an icepack on his knee after being withdrawn.

Denmark head into the clash on the back of a 1-1 draw in Albania that left Morten Olsen satisfied.

However, he has called on his team to start the game and end a recent trend of conceding the first goal in games.

He said: "It was against the plan, they took the lead. It is a bad habit that we should fall behind every time. It also happened against Armenia.

"We would really like to play heady football, and we hope to do against Portugal on Tuesday."

Denmark have a fine record against their European counterparts, winning nine, drawing two and losing three of their 14 encounters.