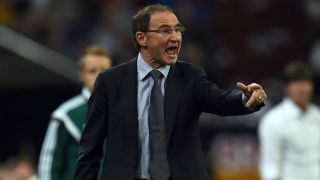 Poland sit top of Group D after picking up three wins and a draw from their opening four fixtures, while Ireland are part of a three-team chasing pack on seven points.

In their last home qualifier, Ireland thumped Gibraltar 7-0, but O'Neill knows the visit of the group leaders presents an altogether different challenge.

"Naturally, we are at home and the onus is on us to try to get forward and try to win the game, and that's what we are going to try to do," he said.

"But there are a number of games left in the competition. You mentioned the top two places [qualify] automatically - it's a tough old group we are in, but we are going for it.

"Sunday is the ultimate test. It's been a good week for the players. Naturally, it has been a bit of a change from their club commitments.

"I gave them some time yesterday [Thursday], those who have family around and about, to go and do that.

"We've just basically been taking our time, regroup as it were, and just getting ready. Ready mentally and ready physically."

This could be a good time to take on Poland, whose build-up has been dominated by coach Adam Nawalka's decision to leave out Borussia Dortmund midfielder Jakub Blaszczykowski.

The 29-year-old had held the captain's armband with the national team before spending the best part of a year out through injury, with Robert Lewandowski stepping in as skipper.

Despite a string of encouraging displays for Dortmund, Nawalka claims Blaszczykowski's absence is down to his lack of physical and mental fitness, but others have pointed to his reportedly difficult relationship with Lewandowski.

Having said that, Poland defeated world champions Germany without Blaszczykowski earlier in the campaign and will be in an enviable position should they take the three points on Sunday.

Coincidentally, Blaszczykowski's last international appearance came against Ireland in a friendly in November 2013.