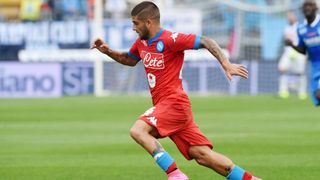 Lorenzo Insigne is expected to be fit for Napoli's trip to Poland in the Europa League as Liverpool prepare for a crucial outing.

Insigne hurt his knee in Napoli's 2-1 win over Juventus in Serie A on Saturday, but has been cleared of serious damage.

He is set to return to training and could be available for the Italian club's clash against Legia Warsaw in Group D.

“The tests have ruled out damage. Lorenzo worked in the gym, and tomorrow will join the rest of the squad," a Napoli statement read.

Napoli opened their campaign with a 5-0 thrashing of Club Brugge on the opening matchday, with the Belgians to take on Denmark's Midtjylland.

Elsewhere, Liverpool can further ease the pressure on Brendan Rodgers when they host Group B leaders Sion at Anfield.

While the Swiss side beat Rubin Kazan, Rodgers' side played out a 1-1 draw with Bordeaux in France.

A 3-2 win over Aston Villa in the Premier League saw the talk surrounding Rodgers' future lessen, but a loss would see it ramp up once again.

Bordeaux travel to Russia to take on Rubin.

High-flying Borussia Dortmund can take control of Group C with a win in Greece, where PAOK await on Thursday.

Krasnodar, beaten by Dortmund in their opening game, host Qabala with both teams looking to get their campaigns going.

In Group A, Celtic host Fenerbahce and Ajax travel to Norway for an encounter against Molde, who are top.

Celtic captain Scott Brown said he was hoping the Scottish side could build on their 2-2 draw at Dutch giants Ajax.

"We're looking forward to it, especially after the result we got in the first game – we went away to Ajax and got a great point – it could maybe even have been three," he told Celtic TV.

"It’s going to be a great atmosphere as it always is at Celtic Park and hopefully we can do ourselves justice."

Tottenham made an unimpressive but winning start in Group J, and Mauricio Pochettino's men visit Monaco, while Anderlecht do battle with Qarabag,

Schalke are looking to stay perfect in Group K when they meet Asteras Tripolis, while Sparta Prague meet APOEL.

With all teams on a point in Group G, Saint-Etienne are at Lazio and Rosenborg meet Dnipro Dnipropetrovsk.

In Group L, the winning starts of Athletic Bilbao and Partizan will be put to the test at AZ and Augsburg respectively.

Sporting Lisbon visit Besiktas in Group H and leaders Lokomotiv Moscow are up against Skenderbeu Korce, while Group I will see Basel host Lech Poznan and Fiorentina meet Belenenses.