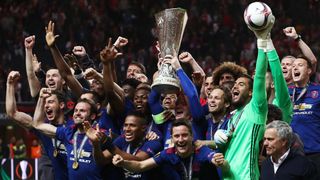 The build-up to Wednesday's match was overshadowed by the tragedy of Monday's terror attack on the Manchester Arena that left 22 victims dead and dozens more injured.

A minute's silence preceded kick-off at Friends Arena, before United went on to defeat Ajax 2-0 thanks to goals from Paul Pogba and Henrikh Mkhitaryan.

Fierce rivals Manchester City tweeted #ACityUnited at the final whistle in a show of solidarity following a desperately tough few days for the city, and Beckham likewise believes that United's win went beyond footballing success.

Writing via his official Instagram page, the ex-England captain said: "Tonight was more important than sport...

"Yes, a big night for Manchester United but an even bigger night for the city and for our country...

"At a time when we are grieving for the families that have lost loved ones we have a sport that has bought a little happiness at a difficult time... We pray for peace."

United's triumph – their first in this tournament – means they will qualify for next season's Champions League.

It is the second time that manager Jose Mourinho has lifted the trophy, following his success with Porto in 2003.