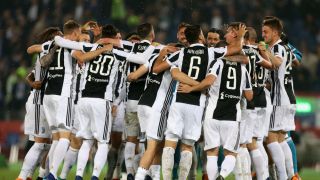 Many of the main arguments in Europe's major divisions have already been sewn up, with Juventus set to collect a seventh consecutive Scudetto this weekend.

Relegation issues remain as fractured and tense as ever and more clubs will join Stoke City, West Brom, Metz, Deportivo La Coruna and others in suffering that grim fate over the coming days.

With the final picture across the continent increasingly clear, here are the remaining issues set to be brought into sharp focus.

Bundesliga (one game to go):

- Borussia Dortmund can make sure of a top-four finish by getting a draw at fourth-placed Hoffenheim on Saturday.

- If Hoffenheim and Bayer Leverkusen win, they will move on to 55 points with Dortmund, meaning goal difference will determine which two of the three finishes in the Champions League places.

- Sixth-placed RB Leipzig could yet pip both Hoffenheim and Bayer Leverkusen if they both lose.

- However, Ralph Hasenhuttl's side will be usurped by Eintracht Frankfurt in the last Europa League spot in the event they lose to Hertha Berlin and Niko Kovac's side get a point. Stuttgart and Borussia Monchengladbach are also still in the hunt.

- Second-from-bottom Hamburg could yet escape automatic relegation if they defeat visiting Gladbach and Wolfsburg lose at home to Cologne.

- Wolfsburg, who occupy the relegation play-off spot, will move above Freiburg on goal difference if they down Cologne and Christian Streich's men are defeated at home by Augsburg.

Schalke are back among the European elite as runners-up May 11, 2018

- Barcelona are already champions, while the relegation of Malaga, Las Palmas and Deportivo La Coruna has been confirmed.

- Victory for Villarreal at Deportivo will seal a Europa League spot, with a point enough if Getafe fail to beat Atletico Madrid.

- Getafe's hopes of finishing seventh and earning a place in the second qualifying round of the Europa League will also end if their result is bettered by Sevilla in their Seville derby showdown with Real Betis.

- Betis are already assured of a path into Europe's secondary tournament and avoiding defeat to their bitter rivals will land them directly into the group stage.

- Lyon will secure Champions League football if they win at Strasbourg and Marseille drop points at Guingamp.

- If Monaco fail to defeat Saint-Etienne and Marseille beat Guingamp, Leonardo Jardim's men will move out of the Champions League places.

- Marseille's hopes of Champions League football will be ended should they lose to Guingamp on Friday and then see Lyon and Monaco win on Saturday.

- Troyes will be relegated to Ligue 2 if they lose and Strasbourg and Lille both manage to avoid defeat.

- Toulouse, who are 18th, will only be consigned to the relegation play-offs this weekend if they lose to Bordeaux, Strasbourg and Lille both win and Caen get a point at Nice.

Premier League (one game to go):

- Liverpool need a point to secure the final Champions League qualification spot at Chelsea's expense. Only if the Reds lose at home to Brighton and Hove Albion and Antonio Conte's men win at Newcastle can last season's champions pinch fourth spot.

- Swansea City are almost certain to join West Brom and Stoke City in being relegated to the Championship. Only victory at Stoke and a 10-goal swing against Southampton - who host champions Manchester City - can save Carlos Carvalhal's team.

- Victory would make City the first team to end a Premier League season with 100 points.

- Only a huge goal swing will prevent Juventus from winning a seventh successive Serie A title. A point at Roma on Sunday will be enough to see them over the line, with Napoli six points adrift.

- A win for Roma will guarantee them a return to the Champions League next term, while their city rivals Lazio will join them if they beat Crotone and Inter - two points behind - lose at home to Sassuolo. Simone Inzaghi's men host the Nerazzurri in their final game of the season.

- AC Milan can secure a Europa League spot if they beat direct rivals Atalanta and Fiorentina lose at home to Cagliari. Otherwise it could go down to the last day, when Gennaro Gattuso's side welcome La Viola to San Siro.

- Cagliari occupy the final relegation spot but are unlikely to have their drop to Serie B confirmed this weekend. Such a scenario would require them to lose at Fiorentina while Udinese, Chievo, Crotone and SPAL all win.