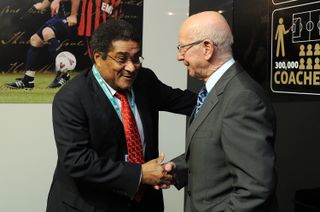 The former Benfica striker was a prolific goalscorer for both club and country - scoring 733 goals in 745 matches - and boasts an impressive list of honours to his name.

Here we look back at the greatest achievements of a storied career that featured 11 league titles and one European Cup win:

1960: Moves to Benfica after being turned down by Brazilian side Sao Paulo.

1961: Makes official debut for Benfica in a Portuguese Cup game against Vitoria Setubal, scores and misses a penalty in a 4-1 defeat.

1968: Prevented from scoring winner in European Cup final by great stop from Manchester United goalkeeper Alex Stepney with scores at 1-1. United went on to win 4-1 in extra-time, but Eusebio displayed great sportsmanship by applauding Stepney's save.

2003: Honoured as the Golden Player of Portugal by the Portuguese Football Federation to celebrate UEFA's jubilee.

2004: Named as one of the top 125 greatest living footballers in the FIFA 100 list by Brazil legend Pele.