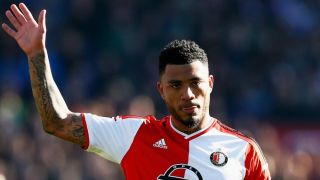 Former Feyenoord defender Jan Everse believes the club should get rid of Colin Kazim-Richards after he was suspended for confronting a journalist.

Kazim-Richards was brought to task by the Eredivisie side after allegedly threatening physical violence against Algemeen Dagblad (AD) writer Mikos Gouka and reports from Holland have suggested that Feyenoord will be actively looking to offload the forward during the current transfer window.

Everse, who spent five years with the club in the 1970s and was capped by the Netherlands, thinks Kazim-Richards should be gone come February 1, regardless of whether or not another team submits an offer for his services.

He told AD: "If he had 25 goals, then you could have found a new club for him, but now it is very difficult.

"This is very annoying for Giovanni van Bronckhorst in his first year as coach. Kazim-Richards has a huge ego and now his true nature [comes] to the top."

Speaking on the possibility of cancelling Kazim-Richards' contract, Everse said: "Then you have him give a lump sum and take your loss. You do not want him later in February again [as it] will cause problems.

"No, you should say goodbye as soon as possible to such a troublemaker."