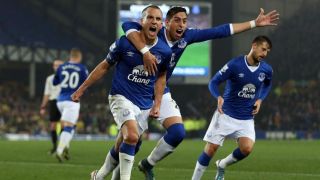 Everton edged into the League Cup quarter-finals with a 4-3 penalty shootout win on Tuesday, having come from behind to draw 1-1 against Norwich City at Goodison Park.

Both goals came in the second half, with Sebastien Bassong's opener cancelled out by Leon Osman.

The hosts then netted all four of their spot-kicks after extra-time failed to produce a winner, Wes Hoolahan seeing his penalty saved before Nathan Redmond fired over to consign the visitors to defeat.

Gerard Deulofeu, Ross Barkley, Romelu Lukaku and Darron Gibson were the men to hold their nerve from 12 yards for the Toffess.

As Phil Jagielka began two months on the sidelines with a knee injury, the Everton defence was often exposed in their captain's absence.

The backline's uncertainty at set-pieces was punished by Bassong in the 51st minute but Roberto Martinez's decision to introduce the creative talents of Barkley and Deulofeu in a double substitution visibly lifted his ailing team.

They were back on terms when long-serving midfielder Osman marked his second appearance of the season with a goal and the additional 30 minutes were required after Everton goalkeeper Joel Robles and his Norwich counterpart Declan Rudd both excelled.

Everton made no mistake from 12 yards with their efforts and the decisive contribution in the shootout would come from Robles, who denied Hoolahan before Redmond – influential during the match – blazed a woeful spot kick into the Gwladys Street End.

Martinez made eight changes to opposite number Alex Neil's seven, with the visitors handing a full debut to Youssouf Mulumbu The midfielder almost enjoyed a dream start when he saw an effort deflected narrowly wide in the fourth minute.

Robles flapped at the resulting set-piece, with John Stones clearing off the line.

An unimpressive start from Everton continued when Vadis Odjidja-Ofoe failed to turn home a corner at the back post.

Robles touched a 14th-minute drive from Hoolahan behind and City were unable to turn their sustained early pressure into a goal.

Everton's first meaningful attack after 31 minutes ended with Lukaku colliding with the post, sliding in an attempt to convert James McCarthy's low cross at the end of a superb team move.

Redmond cut in from the left of the box and forced Robles to tip over for Norwich's eighth corner of the first half, but there would be no way though before the break.

By the ninth corner, six minutes into the second period, Everton were defending with no greater conviction and twice failed to clear before City captain Gary O'Neil fed the ball back towards the six-yard box for Bassong to score.

Martinez sought to rouse his side from their slumber by sending on Barkley and Deulofeu in place of Tyias Browning and Arouna Kone after 62 minutes – the latter player's departure coming as boos from the terraces displayed the frustrations of the Goodison Park faithful.

They were in a more celebratory mood six minutes later when Kevin Mirallas supplied the ammunition for Osman to sweep a left-footed shot beyond Rudd.

Everton remained unconvincing around their own penalty area – Lewis Grabban drawing another fine stop from Robles after some haphazard defending from Gibson.

The game had come to life by the time Deulofeu galloped into the Norwich area from the right to be denied by Rudd and see McCarthy's follow-up blocked.

There were heroics from both goalkeepers - Rudd pushing a sweetly struck Mirallas free-kick over and Robles spectacularly clawing another Grabban header to safety - to herald extra time.

A measured pass by Barkley released Mirallas from the Norwich defence in the 96th minute but his angled low shop slipped just wide.

Jarvis' header from Redmond's floated cross drifted narrowly over before Barkley blazed over in the final act of open play.

The England man would join his team-mates in being far more clinical from 12 yards a few moments later, as Hoolahan and Redmond lost their nerve.