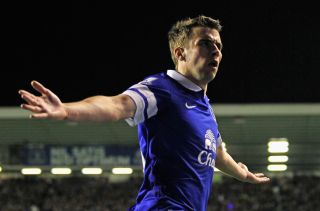 The Republic of Ireland international had to be replaced by John Stones in the closing stages at The Hawthorns, after pulling up with the issue.

Coleman has been one of the standout performers for the Merseyside club this season, scoring five times in 22 Premier League appearances.

And manager Roberto Martinez is hopeful of a quick return to first-team action.

"Seamus felt his hamstring a little bit. We are going to assess him," the Spaniard said.

"We are going to be cautious and see what the problem is but it’s not a good sign because Seamus would never want to come off the football pitch.

"He has been in a terrific moment of form so we will try to get him back as quick as we can."

Everton appeared to heading for a maximum haul on Monday, after Belgian winger Kevin Mirallas had put the visitors ahead in the first half.

But West Brom improved after the break and grabbed a deserved equaliser from defender Diego Lugano with 15 minutes remaining, earning Pepe Mel a point in his first fixture in charge of the club.