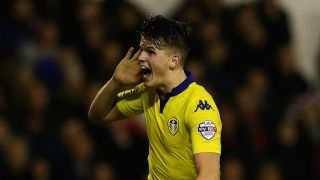 Everton manager Roberto Martinez has made an approach for Leeds United's Sam Byram, while the Spaniard confirmed there is a possibility Steven Naismith will leave during January.

Right-sided player Byram is approaching the end of his contract and has been linked with a £4million switch to Goodison Park during the January window.

Martinez, though, says there is still work to do to conclude a deal saying: "There has been an approach.

"There is nothing else to comment on at the moment. You have to be very careful. I don't enjoy the window clashing with important games.

"There has been an initial approach, but a there is a long gap until official confirmation. If there's a signing to be made, it needs to be the right character, the right addition. In any process there are steps, and some become very long, others are quite short."

Naismith looks set to leave Merseyside during the January transfer window although it remains to be seen where his future lies.

Swansea City manager Alan Curtis has confirmed his interest in Naismith - who has played just once in the Premier League since mid-October - but the Welsh club are yet to strike a deal with Everton.

An offer remains on the table from another Premier League side, though, thought to be Norwich City.

"No, [there is no agreement with Swansea]," Martinez added. "Obviously there's been another Premier League club we made a lot of progress [with] in that respect. I would say everything is more or less agreed in terms of a transfer.

"We spoke to another Premier League club, and that deal has been there since January 1. But it's about sitting down with the player.

"The opportunity is there because of what happened in the previous window. It was one that Steven would have liked to consider, but we couldn't replace him. The squad would have suffered, but we promised that in the next window we would review it.