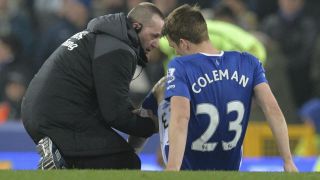 Everton manager Roberto Martinez has revealed the club could sign a new right-back in January as cover for the injured Seamus Coleman.

Coleman picked up a calf injury in Everton's 2-1 League Cup semi-final first-leg win over Manchester City mid-week and is expected to be out for a month.

Everton have five games to play in the next two and a half weeks and Martinez hinted he could move in for some cover during the busy period.

"We have players in the squad who can play in that right-back slot but it’s an area we will look at in this market to see if there’s anyone we can bring in," he said.

"Not just someone for the sake of it, but someone who can help us in that role."

Martinez is without Tony Hibbert and Tyias Browning, and ruled out John Stones filling in at full-back.

"If you move him you lose two players," he said. "We won’t do that. John can play as a right-back and he will always give you that option but I think at the moment we need to be strong and balanced in the squad.

"John Stones as a right-back would be losing one of the best centre-backs in world football."