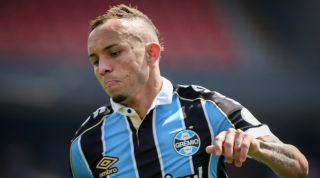 The Premier League side have been monitoring the progress of the Brazil international, who was linked with Arsenal in the summer.

Sky Sports News reports that Spurs sent Steve Hitchen to watch the 23-year-old in the flesh as Gremio drew 1-1 with Flamengo in the first leg of their Copa Libertadores semi-final at the start of October.

Everton set up his side’s goal in that game and left the scout with a good impression.

However, the second leg ended disastrously for Gremio, as the winger was booked in a 5-0 defeat on Wednesday.

Everton impressed for Brazil during their Copa America triumph on home soil over the summer, winning the tournament Golden Boot with three goals and attracting the interest of big clubs in Europe in the process.

Mauricio Pochettino’s side are looking to bolster their forward line after failing to bring in Paulo Dybala from Juventus over the summer.

The report adds that Flamengo striker Gabriel Barbosa, on loan from Inter Milan, may have also captured Hitchen's attention on his scouting mission.

Barbosa was the Brazilian top flight’s top scorer last season while on loan at Santos, and has 19 goals in 20 games this term.

His loan deal is set to end at the start of January, when he will return to Italy.

However, he has been overlooked for game time with the Serie A club despite having a contract until 2022 there, and could be available for transfer.

Hitchen also attended matches in Argentina between Boca Juniors and Newell’s Old Boys and a clash between San Lorenzo and Banfield.

Spurs’ squad is set for a period of upheaval with three key players in the final year of their contracts: Christian Eriksen, Toby Alderweireld and Jan Vertonghen.