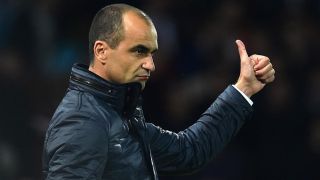 Roberto Martinez is adamant Everton have "never lost the fans" despite criticism starting to mount over their stuttering league campaign.

The Merseyside club take a break from Premier League action on Wednesday when they meet Manchester City in the first leg of their League Cup semi-final.

But another defeat could see the pressure increase on Martinez, with Everton in 11th place in the top flight after a run of one win – an injury-time success at relegation strugglers Newcastle – in their last seven league games.

"The fans see a fully committed team who give everything. We always fight until the end and some of the attacking football this season has been outstanding.

"The performances have been very consistent, but we need the help of our fans.

"We have been in commanding positions at some points and lost leads. We need the help of everyone.

"The fans are showing the great frustration we share. We have to be patient, we can't just become, overnight, a good team and have the experience and know-how to keep leads and win games."

Despite the call for patience, Martinez was eager to talk up his team, adding: "We need to be aware of the special side that we have. The players we have now, for me, are world class."

The Spaniard conceded his squad is too large but insisted Belgium winger Kevin Mirallas would not be sacrificed in the January transfer window.

"What we have seen with Kevin is that he's signed a new contract, had a good pre-season but we have really good attacking options," he said.

"But the way he has been working in the last few weeks, I expect Kevin to have a major, major influence in the second half of the season."

Martinez reported no new injury worries following Sunday's 1-1 draw with Tottenham, although the home side will still be missing several key men.

"We have the same squad available for Wednesday," he said.

"Tom Cleverley came through well, Phil Jagielka is ready to play, but the weekend is a better time.

"For James (McCarthy), every day is important. It won't be too far, probably the end of the month.

"Steven Pienaar is working well and should be available for the weekend."