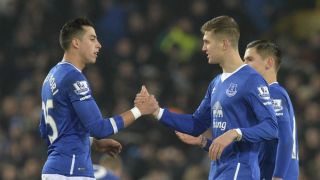 Following Wednesday's 2-1 win over Manchester City in the League Cup, Roberto Martinez is likely to field a somewhat patched-up side for this weekend's FA Cup third-round visit of Dagenham and Redbridge.

The trio are all likely to miss this weekend's visit of John Still's League Two side as Everton seek to maintain momentum in cup competitions.

Everton went out at this stage last season, losing on penalties in a replay against Premier League rivals West Ham, but are heavy odds-on favourites to triumph on Saturday.

Wednesday saw Everton's first home win in all competitions in five matches and the impressive Mo Besic is eager to keep Goodison Park behind the team this weekend.

"Since I have been here, I think it was the best atmosphere," the midfielder told the club's official website.

"I'm pleased that we won the game, especially to give the fans something because the last couple of [home] games were not so good.

"It's always important to have the fans behind our backs and we won for them."

Still – appointed as Daggers boss for a third time on New Year's Eve – enjoyed a winning return as manager against Exeter City on Saturday with Joss Labbadie and Ashley Chambers on target.

Dagenham will also be able to call on the evergreen Jamie Cureton, who made his professional debut more than two decades ago against Everton for Norwich City.

"It's funny how football works like that," the 40-year-old striker told the FA's official website. "I've not had a great time of it in the FA Cup through my career. I had a run to the fifth round with Bristol Rovers in 1999 and we drew Barnsley when they were in the Premier League and we lost 4-1.

"But I've not had many big draws when I've been to the third round or further, so this is the biggest tie I would have been involved in in the competition.

"There aren't many grounds I haven't played at and before the draw I was looking at that and thinking what a great draw Everton would be. It's another one to cross off the list.

"It's great for me on a personal level and it's why we all love football and the FA Cup."