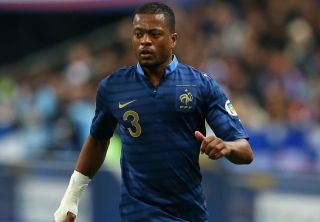 Evra has been a controversial figure since his involvement in the national bust-up at the 2010 FIFA World Cup, and the 32 year-old feels the criticism he still receives is not reflected by the French people.

One of those criticising Evra was former France international Bixente Lizarazu, and Evra hit back at the 43-year-old's comments.

"They want to lie to the people of France, saying Evra is unloved. Arrogant? This is not true," he told Telefoot.

"When I meet people in the street they are super friendly. I have no problem with people, just with pundits. I took (French pundit) Michel Fernandel on a visit to Old Trafford in 2008, he thought it was like Euro Disney.

"They should stop talking, they go too far. It does not hurt me at all because I am a happy man. There are many people who would like to be in my place. It does not affect me at all, but the problem is that it can affect my family.

"These bums should stop lying to France. They are parasites."

Evra, who has won 52 caps, refused to retire from international football following the incident in 2010,.