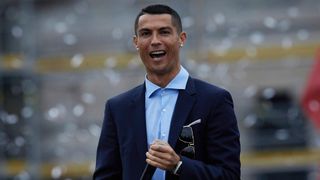 Silvio Berlusconi admitted begrudging respect for Juventus' capture of Cristiano Ronaldo even as he acknowledged the deal as a blow to AC Milan.

Ronaldo's big-money move from Real Madrid has been greeted with optimism across Serie A despite strengthening the Bianconeri's chances of winning an eighth straight league title.

Inter boss Luciano Spalletti welcomed the "strength and visibility" his arrival will give the competition while Carlo Ancelotti claimed it provides additional motivation for Napoli, who were reportedly offered the 33-year-old's services.

Ex-Rossoneri president Berlusconi agreed the unexpected development was broadly positive, albeit to the detriment of his former club.

"What effect does it have? For Milan it has a terrible effect," he told Il Giornale.

"But in truth the arrival in Serie A of an absolute champion like Cristiano Ronaldo is good news not only for Juventus, but for the whole of Italian football.

"I congratulate Juventus, its directors and fans."

Berlusconi, a former prime minister of Italy, sold Milan in August 2017 after more than 30 years as president.