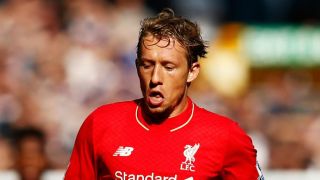 Liverpool midfielder Lucas Leiva says he is ready to deputise at centre-back ahead of Friday's FA Cup third-round clash with Exeter City.

The Brazilian was forced to drop into the back line during Tuesday's 1-0 League Cup semi-final win at Stoke City after Dejan Lovren was forced off with a hamstring injury.

It proved to be a costly outing for Liverpool at the Britannia Stadium, with Philippe Coutinho and Kolo Toure also sustaining injuries.

Hamstring problems for Lovren and Coutinho see them join Daniel Sturridge, Divock Origi and Martin Skrtel in being sidelined by similar issues.

And, with Liverpool now down to the bare bones defensively, Lucas knows he may have to get used to playing in the back four until a suitable alternative can be found, but he hailed the influence of Toure in helping him settle.

"I've played a few games this season at centre-half and of course I'm a midfield player, but if the manager needs me then I'm going to deliver and [on Friday] I think I could help," he told LFC TV.

"Kolo is an experienced player which he helped me. Talking and positioning is sometimes the most important thing as a centre-back but I have experienced enough to understand the position.

"For sure Kolo was a big help. He's got so many games and [on Tuesday] was a positive all round I think, especially with the [injury] problems we had at the beginning of the game.

"I think it could have cost us but it didn't and we just now have to go into the second leg with the same approach."

Before that second leg at Anfield in three weeks, Liverpool set out on another road to Wembley at St James Park.

Liverpool, unsurprisingly, dominate the head-to-head record between these clubs, holding a 19-2 aggregate lead from the five past meetings, including a 3-1 win in the 2011-12 League Cup, when Luis Suarez was among their scorers.

Exeter head into the fixture on the back of four consecutive League Two defeats in which they have conceded a total of 10 goals to Luton Town, Oxford United, AFC Wimbledon and Dagenham and Redbridge.

Liverpool present an undeniable step up in class, but Exeter manager Paul Tisdale is not daunted by the task that lies ahead.

"We are not just looking to sit back and hold on. I don't want to do that," he said. "I think we need to have some intent about us. I don't think we should hold back and wait for the game to happen.

"We need to go out and give it a go and get the balance right between risk and reward. Win, lose or draw we want to finish the game having given a good and positive account of ourselves."