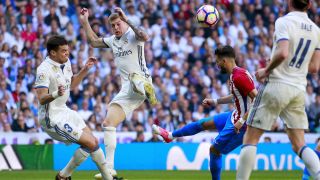 Real Madrid's experience of big matches means they are the favourites for their Champions League semi-final against rivals Atletico Madrid, says Fernando Sanz.

Real have beaten Atletico in two of the last three Champions League finals and Zinedine Zidane's men have taken four points from their two LaLiga games this season.

But former defender Sanz, part of the Real side that lifted the European trophy in 1997-98, suggested Atletico have a greater chance over two legs, the first of which is at Santiago Bernabeu on Tuesday.

"If it were a single game, I'd say Real would be favourites," Sanz told Omnisport. "In single games, Real Madrid are way more powerful because of the experience and also because they are used to that kind of pressure.

"But being a two-legged fixture, I'm a bit worried. In a single game fixture they are already tough, but in a two-legged one, Atletico Madrid are way more dangerous.

"Honestly, if Real Madrid are able to break the solidity of Atletico at the back, they will have the chances. Atletico are a very solid team, a compact group. Real Madrid in Europe are doing things well. In LaLiga they have also been strong offensively.

"Let's see what they are able to do when the game comes. So regardless, Atletico are fearsome in two-legged fixtures. I still think Real are the favourites."

"Common sense is the best phrase to describe him," the 43-year-old said. "He knows what he has, he uses a lot of psychology with the players. He knows the exact role of each player and he especially uses his assets - which are his players.

Cristiano Ronaldo is likely to be the main threat for Atletico to be wary of and Sanz suggested the Portuguese star is coming into form at the right time.

"The facts speak louder than words," he added. "In the quarter-finals against a team like Bayern Munich, which isn't playing like a team like Videoton, he scored five goals.

"I think he's still got a lot to deliver."