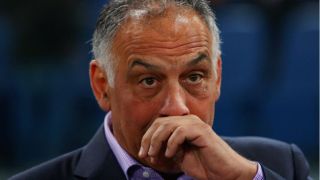 American Pallotta was quoted as calling a section of the club's support "idiots" for their mocking of the mother of Napoli supporter Ciro Esposito, who was murdered in the capital last year.

The incident, which saw fans unfurl a banner criticising Esposito's mother for writing a book about her son, occurred when the sides met in Serie A earlier this month and resulted in Roma being ordered to close the Curva Sud section of the Stadio Olimpico for next weekend's clash with Atalanta.

However, Pallotta's comments appear not to have gone down well with Roma supporters, with the widely circulated picture showing a banner reading: "This f*****g idiot gonna pay you mother f****r."

Roma sit third in Serie A, 13 points behind leaders Juventus with eight matches left to play.