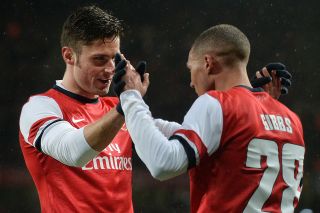 Arsenal proved too strong for spirited League One outfit Coventry City in a 4-0 win at the Emirates Stadium.

Lukas Podolski scored twice in the first half to put Arsene Wenger's men in control, rounding Joe Murphy on his way to grabbing the opener and scoring again with a back-post header following a well-worked set-piece.

Coventry improved significantly after the interval and hit the post through Leon Clarke.

Arsenal stepped up a gear in the closing stages, however, and added further goals through substitutes Olivier Giroud and Santi Cazorla.

Wenger was also able to introduce 16-year-old Gedion Zelalem, the first player to feature for Arsenal having been born after the Frenchman took over at Arsenal in October 1996.

Friday's other game saw Preston - another League One team - frustrate Championship hosts Nottingham Forest in a goalless draw at the City Ground.

Forest went into the game unbeaten in 10 and fifth in England’s second tier, but manager Billy Davies was unable to taste victory over one of his former clubs.

Although the hosts had the better of the first half, they could not find a way past a stubborn Preston defence.

Indeed, it was Preston who ultimately created the better chances, with former Forest striker Joe Garner twice going close before home goalkeeper Karl Darlow was forced into a trio of late saves.

The two teams will meet again at Deepdale for a bid to join Arsenal in round five.