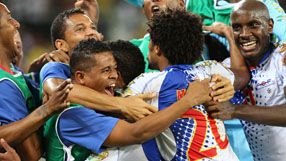 "My team is not as weak as you guys think," the coach told reporters as he basked in the glory of Wednesday's 1-1 draw with former champions Morocco in Durban.

Added to the point they picked up in unexpectedly holding hosts South Africa in last weekend's opening game, the smallest country to ever compete now have a realistic chance of reaching the quarter-finals.

"We have won both home and away against some good teams in the past and even held Portugal to a draw away a few years ago. We are strong home and away and we've got some fantastic players," Antunes said.

"We showed we have a great collection of players like South Africa, Morocco, Nigeria, the Ivory Coast, Ghana," he said, smiling as the names rolled off his tongue.

"My players can play at Chelsea, Manchester United, Milan, Real Madrid, Barcelona. They can go there."

A late equaliser from Morocco denied the Cape Verdians a memorable win but the islanders did score their first ever tournament goal in a performance that belied their inexperience and profile.

"It was a night to congratulate Cape Verde football, a big night for our country. It was a just result and now we have a chance to progress.

"I'm very happy with a night of great dignity for our football and I must offer congratulations to my players. We have the respect of all now because we play good football," Antunes said.

Cape Verde might now qualify even if they do not beat Angola in their last group game on Sunday. A draw would suffice if South Africa beat Morocco in the other Group A match being played at the same time.

Antunes warned the fairytale could have a horror ending.

"You haven't seen the real Angola yet, they are a very strong side."

With a population of just over 500 000, Cape Verde caused a sensation by beating four-time winners Cameroon on aggregate in the qualifiers last year.

The team, nicknamed "Tubaroes Azul" (blue sharks), have rocketed up the FIFA rankings over the last decade from to 182nd in 2000 to 51 last October.