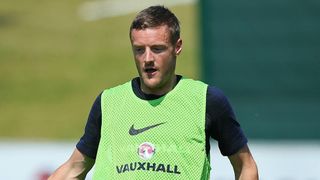 Jamie Vardy says a "fairytale ending" to a film about his life could yet be written after England go for glory at the World Cup in Russia.

A film charting his rise from non-League to international stardom was first mooted in 2016, but Vardy revealed the filmmakers may be waiting for the perfect closing scene.

Asked if those making the picture were anticipating exactly that, Vardy told BBC Radio 5 Live: "I'm not really sure!

"I do know that it's happening so it's down to the directors and the script writers.

"The waiting is nothing down to me, they know what they want. If this is what they're waiting for – a fairytale ending – then so be it."

The 31-year-old has already represented his country in a major tournament, having been part of Roy Hodgson's squad at Euro 2016.

That competition came as Vardy was weighing up an offer to join Arsenal, which he ultimately opted against following lengthy deliberations.

"It wasn't an irritation," he said. "There was just a lot of time when we were in our rooms to think about it. It wasn't something you could just put to the back of your mind.

"But I made my decision back then and I've not looked back since, carried on, played my football, been doing well for my club and I think that's what's got me the opportunity where I can go to a World Cup.

"The Euros was a new experience for me and the World Cup is going to be, but obviously the Euros is a major tournament as well and you know exactly what you've got coming so you can be more relaxed about it knowing I have been there before."