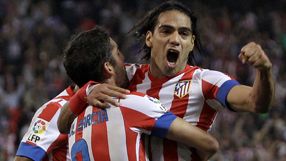 With the rain lashing down in San Sebastian, Colombia striker Falcao had an unusually quiet night until he curled the ball over the wall and into the net for a 90th-minute winner, his ninth goal of the campaign.

Atletico, resurgent under Argentine coach Diego Simeone, have not won seven La Liga games in a row since the 1991/92 season. The victory put them level on 22 points with Barca after eight matches but behind on goal difference.

A jubilant Simeone, a fan favourite at the Calderon when he helped Atletico win the league and cup double as a player in 1996, described Falcao's goal as "delicious".

"Falcao is training a lot to improve his free kicks and today you saw the result of that effort," he told a news conference.

Barca, like Atletico unbeaten this season, survived the dismissal of centre-back Javier Mascherano and held on for a 5-4 success at Deportivo La Coruna on Saturday with Lionel Messi netting his 15th La Liga hat-trick.

Malaga stayed third on 17 points thanks to a 2-1 win at home to Real Valladolid on Saturday, when Real Madrid continued to claw their way up the standings after a poor start to the defence of their title.

Jose Mourinho's side climbed to fourth on 14 points after Gonzalo Higuain and Cristiano Ronaldo scored in a drab 2-0 win at home to Celta Vigo on Saturday.

In Sunday's other games, Real Betis played out an uninspiring 0-0 draw at bottom side Osasuna and dropped below Real to fifth on 13 points.

Michel's spectacular long-distance effort three minutes from time secured a 1-0 success for Levante at Getafe which lifted the Valencia-based side to sixth.

Espanyol secured their first win of the campaign and climbed off the bottom when Christian Stuani's towering header in the third minute of added time secured a 3-2 win at home to Rayo Vallecano.

Real Zaragoza moved up to 14th when they won 2-1 at Granada, who had midfielder Iriney sent off for a wild challenge in the 72nd minute.