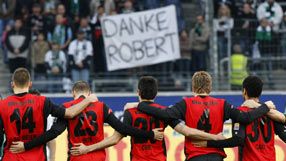 Enke, 32, committed suicide by jumping in front of an express train on November 10, 2009 after spending several years battling against depression.

On a cold and rainy day fans entered a small tent erected near the Hanover Arena stadium to write in a book of remembrance.

Germany coach Joachim Loew and football federation chief Theo Zwanziger then laid a wreath at his nearby grave, accompanied by widow Teresa and Hanover president Martin Kind in a private ceremony.

"Robert Enke, a tough national team goalkeeper, had weaknesses. We must be prepared not to make these weaknesses into taboos but instead lift them from their silence," said Zwanziger in a statement.

Twelve months ago more than 50,000 fans attended a memorial service for Enke in the stadium while thousands more placed flowers and lit candles outside the club's headquarters.

His death sparked an outpouring of grief and sympathy across the country and Teresa Enke set up a foundation in his name, dedicated to the research and treatment of depression.

The issue of depression in professional sport was high on the media agenda after his suicide but has since slipped down.

"Little or nothing has happened in that respect since," Hanover president Kind told reporters.

"You cannot just turn a switch. These things need time... and in professional sport performance is what is demanded and respect for an illness is not really there," added Kind, dressed in a black suit and tie.

Club officials and players have opted to stay out of the spotlight, closing off their two training sessions for the day as they seek to mark the day in private.