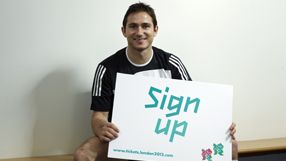 Football will be the first Olympic event with ­matches starting two days before the opening ceremony on July 25 and running until August 11.

The games will be set at some of the most iconic locations in the UK including Wembley Stadium, Hampden Park, City of Coventry Stadium, St James’ Park, Old Trafford and the Millennium Stadium and will be a showcase for some of the most exciting young players from around the world.

The Olympic men's football tournament is an Under-23 competition although three over-age players are allowed per squad. The women’s team has no age restrictions.

There had been hopes the Olympic competition would see the likes of Wayne Rooney taking part in a British team.

However, with the European Championships also taking place the same year, some of the top youngsters in the Premier League may not feature in the games following the European Clubs Association’s insistence that its players must not be forced to compete in more than one major competition per season.

London Olympics chairman Lord Sebastian Coe still believes the Olympics has much to offer, though, and has encouraged fans to support the games.

"I sat in the tournament final in 2004 in Athens and I watched young players like Messi making effectively their international debut. Years later they're playing in a World Cup,” he said.

"So actually an Olympic football tournament, when it's used as it is in a lot of countries, is a way of seasoning young players to future tournament football.

"It's a great springboard and a number of young players have understood the nature of the international game through Olympic competition and gone on to play in World Cup finals.”

Team Great Britain (GB) are already guaranteed a place as the host nation and it has been speculated that England Under-21 coach Stuart Pearce could lead the team, although nothing has been confirmed by the Football Association (FA).

It is also unclear whether Wales, Scotland and Northern Ireland players will be part of the GB team due to concerns by their FAs that these teams will lose their independent status in international football.

However, the current crop of Premier League stars are backing the 2012 games and have encouraged supporters to get tickets for the tournament.

Applications for Olympic football tickets can be made between March 15 and April 26 and will not be allocated on a first come, first serve basis.

Prices vary and start from just £16 with special discounts for young people and seniors. Fans can now sign up to apply for tickets at www.tickets.london2012.com