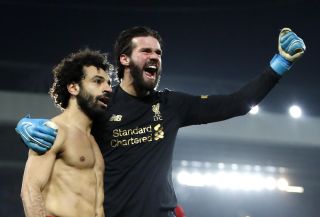 Liverpool’s defensive form has helped underpin their surge to 19 points clear in the table – and sees an unusual name in the Fantasy Premier League spotlight this week.

Alisson Becker has conceded only one goal in his last nine league appearances to achieve the rare feat for a goalkeeper of topping the PA news agency’s Transfer Score rankings.

His defenders also score highly going into gameweek 25, while upstarts Sheffield United continue to make waves in their first season back in the big time.

Alisson’s recent average of 7.4 points per game ranks fifth in the league, earning him a rating of 80 in the most important transfer score category – form accounts for 50 per cent of the total, with the remainder made up by cost, ownership and fixture difficulty rating (FDR).

Two of the players ahead of him, team-mate Mohamed Salah and Manchester City striker Sergio Aguero, cost £12.5million and £12m respectively to Alisson’s £6.1m, with Chelsea defender Cesar Azpilicueta and Ayoze Perez the other members of the top five. Aguero’s runaway average of 9.2 points per gameweek serves to restrict the ratings of the other four players.

Henderson’s club-mate John Fleck tops the midfield rankings and clocks in second overall with a transfer score of 75 as the South Yorkshire side also face a nice run of games.

With the trip to Crystal Palace followed by home games against struggling Bournemouth, Brighton and Norwich, now could be a good time to invest – though be aware that the Blades are one of a handful of teams not in action on gameweek 28, so some forward planning may be necessary.

It is no surprise to see a Liverpool player top the defensive rankings – though Joe Gomez is there not primarily on form, but aided by ownership and FDR.

Southampton’s Jack Stephens is second, with his transfer score held at 72 – two points behind Gomez – by the Saints’ 3.0 average on FDR. The same is true of Azpilicueta, with Chelsea having the hardest run of fixtures on paper at an average FDR of 3.7 – they face Leicester, Manchester United and Tottenham in succession.

Liverpool’s first-choice back four, completed by Andy Robertson, Virgil Van Dijk and Trent Alexander-Arnold, are all inside the top 15 of the overall transfer score rankings. Those three are the next defenders on the list after Azpilicueta.

Burnley’s Chris Wood has built up a head of steam and is comfortably the leading striker in transfer score this week.

With Ashley Barnes missing the last three-and-a-half games, his regular strike partner has seized the mantle with three goals and an assist, with a match-winning performance against Manchester United adding three of his five bonus points in that time.

His 1.3 per cent ownership helps him to a transfer score of 73, 10 points clear of the next best forwards – Watford’s Gerard Deulofeu and Arsenal youngster Gabriel Martinelli.