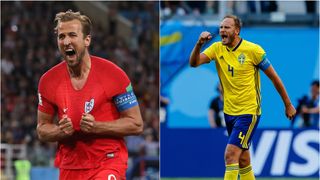 Andreas Granqvist endured a sleepless night ahead of Saturday's World Cup quarter-final against England, but it is not the looming prospect of facing the tournament's top scorer Harry Kane that is keeping the Sweden captain awake.

Ahead of Sweden's media duties at Samara Arena on Friday, Granqvist's wife gave birth to the couple's second child back home, with the defender happy to report both mother and daughter are doing well.

England's Fabian Delph recently returned to the camp after dashing home for the birth of his third child, while the Denmark squad had a whip-round to pay for Jonas Knudsen to attend the premature arrival of his daughter.

Granqvist, though, was told to stay in Russia by his wife, as Sweden aim to reach a World Cup semi-final for the first time in 24 years.

"It was good timing, I didn't sleep very much last night, so I'm glad it's happened now," Granqvist said.

"My wife did a wonderful job back home, both baby daughter and wife are doing really well and as far as the match tomorrow is concerned I'm going to give my everything and hopefully we'll get the final result we're looking for.

"Getting a daughter is the most beautiful thing you can get, it's a dream for every player to play a quarter-final in a World Cup, I'll try to enjoy it and I'm looking forward to the match tomorrow to do the best we can. I'm raring to go."

The Sweden skipper will be in direct opposition to his England counterpart Kane, whose penalty against Colombia took him to six goals for the tournament, two clear of Belgium's Romelu Lukaku.

Granqvist paid tribute to his team's defensive organisation, but knows they can ill afford to take their eyes off the prolific Tottenham striker.

"We have strength in our collective defence, we do the job 100 per cent and we have our own attacking style," he said.

"This is why we've won most of our games, and at set-pieces we've been strong.

"We know they have Harry Kane who is really dangerous in the box and we've given the opportunity sometimes to put crosses in so we need to be strong and make sure they don't get the service they need."

Half of Kane's goals at Russia 2018 have come from the penalty spot, while Granqvist netted two for his country en route to winning Group F, but the centre-back would not be drawn on who was the more proficient from 12 yards.

"So far we're both 100 per cent, so we'll see after the match tomorrow," Granqvist said.

"But he's incredibly skilled, not just at penalties, he's good at everything. That'll be a very tough match but we'll do everything to stop him."