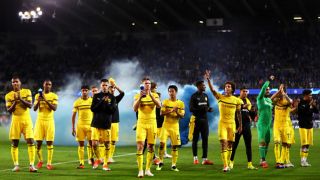 Favre handed a place in his starting line-up to 18-year-old playmaker Jadon Sancho, but it was second-half substitute Pulisic, on his 20th birthday, who turned the game with his strike in the 85th minute.

The result ensured Dortmund remain unbeaten in five games in all competitions this season, but Favre pulled no punches when discussing the challenges his players faced during a first half in which they were second best.

"It was difficult," he told reporters. "They are Belgian champions and they worked hard.

Words can't describe !! Dreamt about this day as a kid. Blessed to have made my Champions League Debut tonight with a win! Well done team! September 18, 2018

"In the end, they were tired, but it was difficult - it was very, very hard for us. We did not move enough in the first half, which is why we struggled to create chances.

"We are satisfied that we have won our first away game. But we have had trouble and we have much to do.

"It is a very good thing that we won, but we should not exaggerate expectations.

"We have many young players, it takes time to play well."

The late goal denied Brugge a share of the points in a tough Group A that includes Atletico Madrid and Monaco.

"In the first half we played our own game, we had more ball possession. But we started with confidence in the second half as well and that makes the final result a bit harsh.

"I think everyone can see now that if we play our own game we can do pretty well. I think we will just need to continue like this and the points will follow."