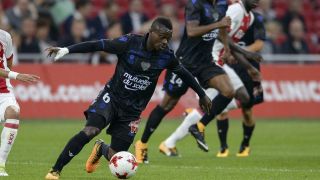 Nice head coach Lucien Favre is unsure whether Jean Michael Seri will remain at the club after the transfer window closes next week, despite Barcelona withdrawing their interest in the midfielder.

Ivory Coast midfielder Seri sat out as Nice suffered a fifth loss in six games across all competitions on Saturday, going down 3-0 at Amiens in Ligue 1.

Club president Jean Pierre Rivere described Seri as being "very disappointed" after Barcelona failed to complete a deal for the 26-year-old, who is reportedly valued at €40million by his current employers.

Nevertheless, Favre is refusing to assume he will be able to count on one of his star men from last season on the other side of the international break.

"I do not know the situation, which is really going to happen until August 31," he told reporters.

"Normally it is resolved but nobody will be able to tell you 100 per cent certainly."

Favre also rejected suggestions that the Seri transfer saga is to blame for Nice's prolonged downturn.

"It's not an excuse," he added. "Of course, if Seri is there it's going to be better but it's not just that."