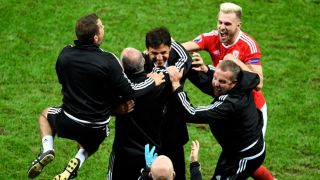 Wales manager Chris Coleman credited his success with the national team down to not being afraid to dream or fail after their stunning 3-1 Euro 2016 quarter-final victory over Belgium.

Belgium took the lead in the 13th minute of Friday's contest at the Stade Pierre-Mauroy through a fierce long-range effort from Radja Nainggolan, only for Wales to dump out one of the pre-tournament favourites with a remarkable comeback.

Captain Ashley Williams headed Wales level on the half-hour mark before a superb turn and finish from Hal Robson-Kanu made it 2-1.

Sam Vokes' fine late header made sure of progression to the semi-final, where Wales will meet Portugal in Lyon next Wednesday.

The run to the last four marks the first time Wales have reached the semis of a major tournament and represents an incredible turnaround in fortunes for a team that finished second bottom in their qualifying group for Euro 2012.

Speaking to BBC Sport after the match, Coleman said: "Don't be afraid to have dreams. Four years ago, I was as far away from this as you can imagine. Look what's happening.

Coleman was particularly pleased with the way his side stuck to their principles of passing football and creativity, adding: "We were in a game where we created more chances. They had their fair share, but we competed.

"That's all we could ask of the players. We've got players like Aaron Ramsey, Gareth Bale, Joe Allen, players of that ilk. We've got to pass the ball. That's what gets the best out of the team.

"Getting the best out of your best players gets the best out of the team. Everybody, all the players in the team can pass the ball. That's what we try to do, whether it's Belgium or anyone else.

"That was our only gripe in the England game [a 2-1 loss]. We never passed the ball. Normally in the games, we try to pass the ball.

"We always try to stick to our strengths and our identity. We were determined to do it tonight, even if that meant we never got the result. We wanted to show people that we can be a very inventive team, and I thought we showed it."